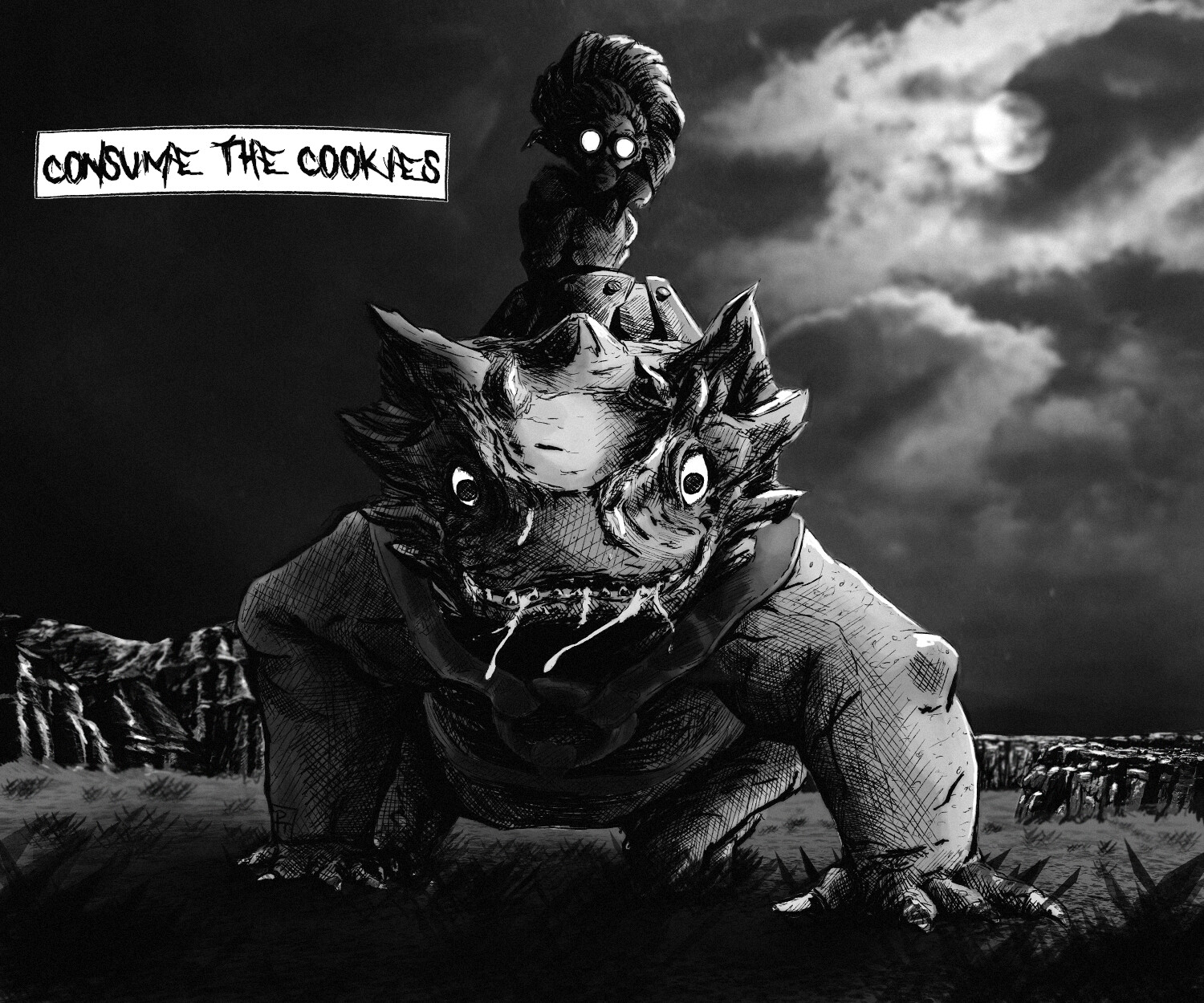 When she’s not baking cookies or making weapons, she’s dominating pubs in Dota.

Perhaps the funniest statistic about her win rate is her “worst versus” section in her hero page. Out of the 10 heroes she’s listed as “worst versus” she has a win rate below 50% with only one of them,

This hero is particularly strong right now and in this post we’ll go over some strategies to beat her in your pubs that don’t include banning her.

Snapfire is a strength hero primarily played as a support.

This is one of the reasons why she’s so powerful. All her abilities do damage and disable in some way, the damage is high as well.

The most popular build for Snapfire is to go Scatterblast at level one, followed by Firesnap Cookie, maxing these abilities, and then ultimate at level six. Lil’ Shredder is maxed last. Some players go Firesnap Cookie at level one to get an advantage over the bounty rune.

By level two Snapfire has a stun and a slow that deals a good amount of damage. If you’re caught out of position without full HP, a small combo can lead to your death.

For example, if you have 75% HP and Snapfire gets behind you, she can slow you then stun you. If her lane partner has another slow or stun then with those spells and right-clicks you’ll either die or be very close to death unless you have an escape or save.

This is one of those Dota situations that’s hard to deal with. Even if you’re at full HP, a good combo that features two stuns, a slow, right clicks, and nukes will be a bad time.

In this situation, if you’re alone then there’s not much you can do other than try and juke through the trees and try to escape that way.

The way to deal with this is to rely on your lane partner. Hopefully, they’ll have a stun or slow that can disrupt the Snapfire combo as well as put pressure on the enemy, making them fear for their own death. Having a save from Abaddon or Treant Protector can be very useful as well.

Unless you want to always be back peddling and not contesting the lane creeps, you have to risk being killed. Another way to deal with Snapfire is to play aggressively. Try to make her fear for her life rather than you. This requires particular heroes as Dota is all about matchups and some heroes are just bad against Snapfire in lane.

In team fights, Snapfire likes to be behind her allies. She can help them escape with her cookie or make them jump forward with a stun to initiate.

During large team fights, Snapfire likes to be far behind her allies so she can use her long-range ultimate for the max duration.

So, like most team fights, if you get initiated on, you’ll be in a bad position. You’ll be forced to react and respond in limited ways. Unless you have a great counter initiator on your team like

Enigma, or another hero, you usually don’t want to be the one responding in team fights.

Snapfire is a tanky support because she’s a strength hero so even if you get the jump on her, killing her won’t be as easy as killing someone like

Crystal Maiden. She also has a decent escape ability with her cookie that allows her to jump across terrains.

So what’s the solution? This hero is one of the most winningest heroes picked most often for a reason. She’s hard to deal with.

You have to outplay her and work with your team to get the advantage because in most situations against Snapfire, you won’t have the advantage.

Communicate with your allies to predict the enemy movements and kill them. Even if you have weak meta heroes you can still win fights easily if it’s three VS two. Use those ganks and kills to gain map control and momentum and snowball.

If you sit and wait until you’re fully prepared against Snapfire, you’ll be at a disadvantage because she’s so strong and versatile. Make coordinated movements with your team to win team fights in your favor and build off those towards victory.

Watch out for her combos potential

One of the many reasons Snapfire is strong is because of the synergy her ultimate has with many spells. Huge team fight spells like a Chronosphere or Ravage set up the perfect situation for Mortimer Kisses to maximize its damage. Even a Sand King or Nyx Assassin stun can be a great set up.

The ultimate does a lot of damage every second, it slows, and works in an AoE so when you have a multiple person Chronosphere or Ravage, you're able to damage multiple heroes and have a follow up disable with its slow.

When fighting against Snapfire and her team, be mindful of large team fight spells that can set up a destructive Mortimer Kisses. Try to force these ultimates during an unideal timing for the enemy so you don't have to fight into both spells or try to coordinate fights when they're on cooldown.

Heroes and items strong against Snapfire

Any mobile heroes work well too.

Weaver is a great one. He can go invisible and move fast to avoid her spells and then get on top of her to put massive pressure on her.

Faceless Void works well thanks to similar reasons. He can Time Walk off damage and then get on top of her to force her to react or get bashed. You also take away a combo potential by having Chronosphere on your side. Another advantage is his chasing ability. Since Snapfire can jump up or down cliffs, Faceless Void can follow her with Time Walk.

Force Staff is a great item to pick against Snapfire. She’s great at taking positional advantage so you can counter that with a Force Staff. Her ultimate makes her own large chunks of the fight area and if you’re trying to walk out of the burning areas, it’ll be a bad time. Simply Force Staff yourself or your teammate for a good time.

Pipe of Insight is also great. She deals a significant amount of magical damage so Pipe is a no brainer counter to those spells.

Glimmer Cape is another great item. You gain magic resistance plus invisibility so Snapfire will be shooting her ultimate blindly. Plus invis equals auto win.

There is no doubt that Snapfire is strong. All her abilities stun or slow and do damage, which is pretty broken. She’s a support that’s a tanky strength hero so she’s hard to kill. She has an ability that lets her jump terrain so she’s hard to lockdown.

There are many things going right for this hero. This seems like one of those Dota moments where you’re looking to survive an overpowered hero meta.

You can also play her to better understand her strengths and weaknesses.

What do you guys think about Snapfire, is she too broken? What are your tips for dealing with this hero? Rubick may not that easy to counter her, she always try to find fog to cast her ult from afar Nyx Assassin should be a great counter for her as well.

Can cancel he ult with carapace and is naturally a hunting hero that can try and scout her out.

Jesus christ that image is horrifying No, do not! Hero normal.

Silencer is a good counter. Snapfire has 4 actives, a channeling ultimate and usually doesn't build BKB or Eul's. How can you not mention Nyx as a counter? Carapace owns her throughout the entire game, and is by far the easiest way to stop the ult aside from a Silencer ult. @Yami Yugi if your idea of Rubick being a counter is based solely on his ability to steal ultimate abilities, you have the wrong mentality for the hero. I could argue you may get more value from stealing a Scatterblast or a Firesnap Cookie after Arcane Supremacy alone is taken into account. A Telekinesis into a short-ranged, zero-second cast point Scatterblast deals 548.1 damage. Accessible by level 11, this will likely deal at least 30% of a hero's maximum HP in damage at that stage in the game.

@miiigz Guardian Greaves is her most common purchase though which allows her to dispel a silence. just pick nyx against her, she goes straight back to kitchen :p

Just go classic windranger with diffusal. Snap was balanced after so many nerfs to ulti and base dmg. Now she cant carry more than 1 neutral item makes her a lot squishier. @fathomorg Yeah but it still can be used after she starts the ult. Silencer definitely still needs to be good in the game for it to be a good counter but that unfortunately is the case when heroes are overpowered. or just fucking volvo retards should balance their shitty game

@Fathomorg aside from her hideous playstyle, you have a point I don't want to trashtalk your article but you basically said: she is the strongest hero in the game - try to play better, buy force staff, glimmer and pipe, pick Weaver and Void and hope you win. Not sure going void against her is a great idea, what I love when playing snapfire is an enemy hero who has to stay in one position when they ult. Legion, Pudge being prime examples, void, mars, monkey king as well. As soon as they ult I know exactly where my kisses are going. how dare you turn a cute dragon to spooky dragon. I disagree about Rubick. I think that even though the spells are good, Rubick needs to position himself in a pretty dangerous way in order to use them. Basically, Rubick doesnt want to be positioning himself in fights in the same way Snapfire does. Rubick will die in midgame fights if he tries to go in and use the Q, for example. The cookie is a nice steal, and the ult is good, but Snapfire can cast that from like three screens away so good luck stealing it.

I think Nyx is solid. He can reliable cancel her ult and also go blow for blow at close range if he uses carapace correctly. He can also find her before the fight begins so she's useless. Void and Weaver are good suggestions though.

All in all, this hero is obviously broken and overpowered if these are the best things you can do against it. I found out clokckwerk is good vs snap