Top Picks and Bans for MVP.Phoenix over the last 6 months

The Korean Dota scene is seeing something close to an inverse of what is happening in League of Legends. Instead of Koreans migrating out of the country to escape its competition, foreigners are moving into Korea for Dota. Team Zephyr, until its disbandment last year, consisted of three Americans, one Australian, and a Singaporean. MVP.Phoenix’s sister team, HOT6ix, recruited a promising talent, Jerax, who is from Finland. And we have MVP.Phoenix, our Korean wildcard team, host to kphoenii, from Australia, and Nutz, from Singapore. It’s a signpost of the level of talent in Korea.<!--END_PREVIEW-->

This MVP.Phoenix roster is also fairly new, consisting of recruits Febby and kphoenii, after they restructured their team following a last place finish at the Dota Asia Championship. However, like every team who had to fight through the qualifiers, they earned their spot. On the way to their wildcard spot they had to beat Rave, a team which beat MVP.Phoenix twice in the Summit 3 qualifiers, a double elimination format. Before MVP.Phoenix’s shuffle, they were known for their predictability, namely their commitment to heroes such as Warlock and Slark. During TI5’s qualifiers, this was the case for Witch Doctor. He was their most picked hero, with a win rate of 75%. MVP.Phoenix is unorthodox in that it favors heroes that other teams do not. In some cases they are the hipsters of Dota by showcasing heroes before any one else did. In other cases, such as Witch Doctor, they may be forcing a hero that isn’t as stable as other top support picks such as Dazzle and Lion.

Korea has no shortage of gaming talent. They've had a history of dominance across any major eSport that they’ve dedicated themselves to, such as Starcraft and League of Legends. It only seems like a matter of time before we start seeing signs of an emerging Korean force in Dota. With two Korean teams at TI5, we may see the approaching storm.

Vega Squadron is a relatively new team that’s lived on the outer tiers of Dota, until their recent acquisition of seasoned players Mag and Solo vaulted them to TI5 contention.

Among the wildcard teams, Vega Squadron stands out as the one team with the least LAN experience. There’s a reason why there’s a higher regard for players who have won a LAN. It requires greater physical and mental resilience to play on a tight schedule, deal with unforeseen complications outside the comfort of your room, and finally, perform in front of a live crowd. Even experienced teams such as Evil Geniuses are infamous for their first day LAN jitters. Though players may not confess to it, anxiety, nervousness, and inexperience can impact your skill in a sport that demands focus.

While top tier teams, such as Team Secret, can afford to limit their drafts and scrimmages to hide their TI5 strategies, Vega Squadron needs as much experience and playtime they can squeeze in over the upcoming weeks. Their recent draft picks suggests a team that is saving strategies for TI5 (this is not to say they aren’t getting their essential practice via private scrimmages). 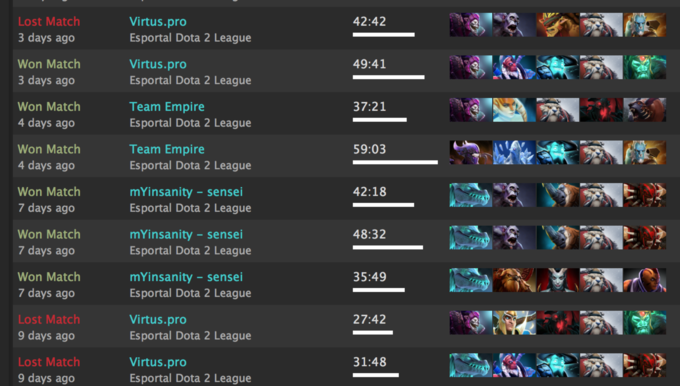 Solo is one of the few players with a wide breadth of comfort heroes, similar to EG’s Fear. They are the kind of players that give flexibility to a draft, especially when a captain randomly plucks a hero that fits but the player hasn’t recently played. With Solo, this is a testament to his experience. However, this is not the case with Vega Squadron’s other members, such as No[o]ne and Pashae, who struggled during the grand finals TI5 qualifier match against Na`Vi.

Mag may also be playing with a vengeance after he missed last year’s TI4 when he was kicked from Empire’s roster. Look to veterans Solo and Mag to offer stability to the young roster of Vega Squadron. They'll be a force if they can refine their strategies and figure a way to gel their communication throughout the mid and late game. In any case, Vega Squadron will be a must watch team throughout the wildcard games. lol pasha was afk in this video Last year MVP won VP, now it's going to be a CIS revenge. Fuck me. I was 4.9k when I got matched against Noone from Vega who was 7k. He got a double kill including first blood as Faceless Void at minute 1. Nice matchmaking. @I have bought a.c.c.o.u.n.t i think he was raptured ti5 will be interesting.. WHen will this game going to happen? i remember there was a TI (?) where mvp saw virtus pro's matchmaking games and make it like a coincidence. I will always look down on mvp for that reason.