In the San Francisco Bay Area, Redbull hosted a two day Dota 2 tournament: one day for casual fans, and the other for pros, grand finalists vying for a prize pool close to $90,000.

Lionel Messi isn’t going to wander in your Sunday morning league game, but for devout fans of Dota 2, they can get an approximation of what it feels like to play a game with their idols. This is the offer Red Bull made to kick off their weekend festivities at the AFK Gamer Lounge in San Jose, CA, “Team up with (and against!) pros, personalities, and total strangers on your quest for greatness.”

The last time I was at an internet cafe was during a time when it was more like your neighbor’s basement with pop up tables. In San Jose, the AFK Gamer Lounge spans 15,000 sq. feet. Its first floor is part restaurant, part bar, and you get the feeling that in the evening the tables are shoved aside and it becomes a night club. On the lower level is where the majority of the gaming happens, with rows and nooks and private rooms of computers.

Usually, Dota matchmaking system pairs teams of near skill, but at the San Jose LAN your team makeup was left to pure chance. The tournament was open to anyone. The least you could hope for was that the pro or personality on your team had a decent amount of experience. In the opening match of the tournament, Brax, from Summer’s Rift, picked Templar Assassin and went towards the mid lane. By sixteen minutes, he had Power Treads, Midas, Desolator, and racked up kills in every lane. It looked like a win was inevitable, until his confidence led him into several losing team fights.

Over the course of 10 hours, a pool of 100 fans, pro players, and personalities whittled down to two: Don Do and Richard Tran. Both are amateur players. Red Bull may have gone for hyperbole when they advertised the event as “a quest for greatness,” but these two winners were invited to play tomorrow on the grand finals stage in the All Star match, in front of a crowd of 2,000 people.

“I feel great, man. I didn’t expect to go this far, honestly,” Don Do said. “I just wanted to play some Dota games.”

The Warfield Theatre first opened in 1922. It’s an architectural landmark of San Francisco. It has been host to musicians and comedians, from Bob Dylan, Guns N’ Roses, Green Day, to Jim Jeffries, Dane Cook, and George Lopez. On Sunday, it was the venue for the grand finals of the Red Bull Battle Grounds tournament, IG vs Team Secret. 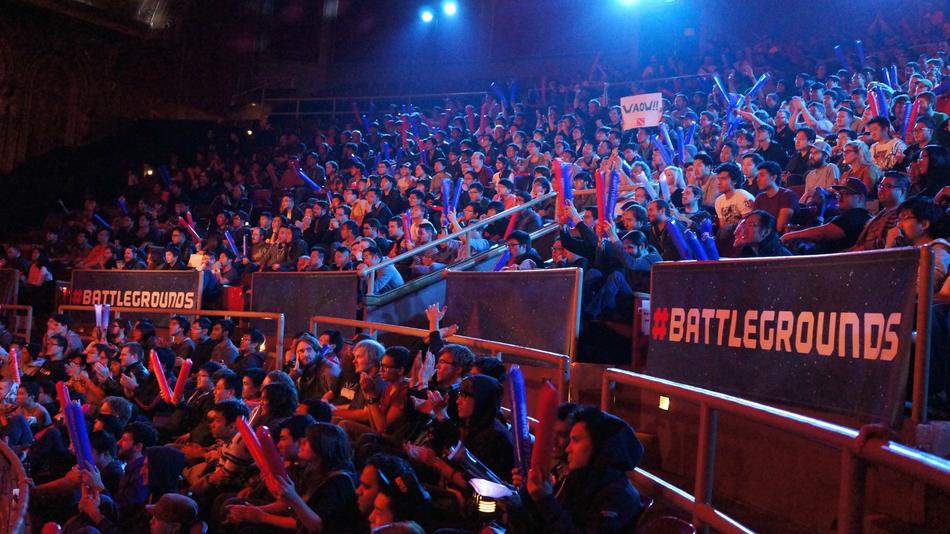 The tournament was as much for the fans as it was for the actual participants. Red Bull seems to be aware of this as well, with its amateur tournament the day before and including its two winners in Sunday’s All Star match. The post game interview wasn’t of its all star players, but of the two amateur players.

“It’s pretty surreal,” said Don Do, about being on the main stage, “I’ve never played in front of a big audience before.”

Due to the nature of eSports, events like these are few and far between. We celebrate and express ourselves online, within Twitch.tv chat boxes and forum threads on community sites such as reddit and joindota, where our mode of expression is to type in all caps lock and copy and paste meme phrases. We can’t slam thundersticks and we can’t scream for our favorite team after a winning fight. If eSports fans are still seeking for reasons to legitimize their passion, its moments like these that help.

In between matches I met a fan who told me her favorite team was Cloud 9, and when I said that EternalEnvy, Cloud 9’s captain, was here, she froze. She said, “Where?” and slowly turned her shoulder, as if to spy him from a distance.

As the matches started, it was apparent that Team Secret had the home crowd on its side. In an event that’s considered a “mini-TI” due to its West vs East narrative (IG is from China), the US crowd was going to take the European team.

After three games Invictus Gaming held a 2-1 lead in the series. Team Secret faced elimination. Earlier I asked spectators whether they believed in momentum, whether mental endurance and resilience can play a factor in a sport that depends on it. Their belief was that Team Secret has been through this before. They have so much experience, so many big stage moments, that the pressure wouldn’t get to them. They would prevail. If in sports we believe our athletes can perform supernatural feats with their bodies, in eSports we believe they can sustain the same mentally with confidence and poise.

If fans believed in Team Secret’s mental strength, it showed in game 5. Secret seemed to have made all the right plays. They anticipated ganks and made the right rotations, leading to an early three to one tower lead. In the end it was about execution. IG attempted a Roshan fight and left their two supports on the outside hill, where Secret had earlier de-warded and IG should have expected a ward. Arteezy on his Tiny blinked in, activated his BKB and wiped out the supports.

The crowd erupted, nearly muffling the announcer's voices booming from the speakers. The chants began. "LET'S. GO. SEE-CRET. clap clap. cla-cla-clap." Secret took Roshan and commanded a lead that they never gave up.

After six hours of gameplay, Team Secret was victorious and Gustav “S4” Magnusson, its captain went to hoist the tournament trophy. He waved his teammates over to come and celebrate. In the post game interview, he talked about he expected the match to go five games and that he knew IG were strong opponents. His last message was to the audience. “Thank you fans, for watching,” he said.

GG was a good series, thanks red bull What happened to puppy as captain? this is a bit irrelevant i guess but i'll just drop this here, hoping the message will come across.

i see how alch pick rate just dropped by almost 4% since the patch. somehow it occurs to me that icefrog wants players to pick alchemist more, but exposing alch's brew timer on his primary nuke to enemies and forcing him into a farming meta will just further push players away from picking him up. his winrate will not change either, or rather, it would just drop further down. the aghs upgrade will only be situationally relevant and will be hard to pull off in a patch that's more focused on team fights.

if icefrog is really that desperate to see him in the pubs and pro games alike, maybe giving alch some slight buffs to his ganking play might do him well. i also want to see alch's general winrate to go up to maybe at least around 45-ish %.

btw this "mini-TI" looks fun. how i wish i could go spectate in events like these irl :( @internet the explorer, Dude alchemist's pick rate went up almost 16% in the first 2 days of the patch. The 4% you're talking to is probably the same thing that happens a week after a new hero is released; people have played the new concept and got tired or aren't interested in it anymore.

But yeah this tourny was pretty awesome, Team Secret for TI5 Champions!

counterpicking is the way to go man